My project from the May 1961 issue of Stitchcraft was a charming tapestry handbag with a Victorian-inspired flower ribbon design. The magazine gives directions for either the handbag or a piano-stool top. As much as I would love to have a handbag that matched my piano stool, I’m just making the bag for now.

I’ve never worked in tapestry before, but for this project it’s really just

counted cross-stitch done on tapestry net canvas with tapestry wool. The hardest part was getting all the components together! The  original pattern calls for Beehive Tapestry Canvas No. 27 and Beehive Tapestry Wool, which as far as I can see do not exist anymore — and if they did, they could very well be quite different from the same canvas and wools manufactured in 1961. Unlike cross-stitch fabric, there’s no indication of holes per inch, so I had to sort of guess from the photo of the bag (3 purple stripes across and 3 or 4 flowers vertically in the stripes) and the number of stitches in one repeat of the chart and factor in the size that I wanted the bag to be (a little smaller than the 9 inches deep and 11 inches wide given in the pattern) and the size of the modern handles.

I found some net that seemed about right, but tapestry wool is not to be found in a craft, knitting, wool, fabric, or notions store anywhere near me. So I had to order it online… from a mail-order Internet store whose address is in my own city, but does not have an actual brick-and-mortar store. So I couldn’t see the wool before buying and they had to ship it to me, when I could and would have gladly just gone over and picked it up. And seen it beforehand… because it is really thick! About as thick as double knitting wool. It would have been so much easier to match the size of the wool to the size of the net if I could have found both of them in the same place. It’s usable with the net I bought, but I think the bag will be rather stiff.

The handles were similarly difficult. My great knitting/notions store down the street has catalogues from a company that makes knitting needles and all sorts of related knitty-crafty stuff, including a huge selection of handles and straps and whatnot for making bags. I ordered a nice (I think?) set of handles through the store and nothing happened for weeks. Then I got a message that the handles, in fact all of the handles in that catalogue from that company, were no longer available. Now I’ve ordered some more online. We’ll see what arrives!

Modern technology is lovely and all, but I would love to be able to go to an actual store 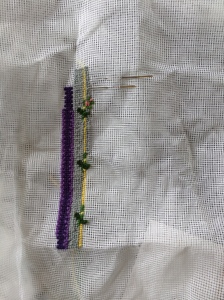 and buy all of this stuff together. It works for knitting, sewing and embroidery, but I guess tapestry is such an unfashionable hobby that it’s not worth using store space for the materials. I should probably be glad that they’re still manufactured at all.

The work itself is not difficult, but I have to admit, it’s a bit boring. I do like the way it’s turning out, though. May 2019 is almost over, but this project is nowhere near being finished, so I’ll update this post when I have something more to show.

Edit a few months later: This project did not work out. The yarn is too thick for the fabric, the handles are too big for the bag, I hate counting tiny holes in tiny fabric and not being able to fix mistakes, and I really don’t know what I am doing as far as tapestry is concerned in general. Maybe I should take a class or something until I try it again. Until then, this project is permanently on hold. Better luck next time!

View all posts by thestitchcraftsixties