“Someone coming to tea, nothing much in the house and you are short of materials? Here are three recipes that don’t need much in the way of ingredients, don’t take long to mix and are delicious to eat.”

I’m obviously not going to have anyone over for tea anytime soon, since Covid-19 social distancing and isolation restrictions are still in full force. Not being able to go out to buy groceries very often if at all and having to use many non-perishable items that had been lingering in the back of cupboards did make me think of those recipes in earlier Stitchcraft issues, though. In Great Britain, many items were rationed even years after World War II ended, and easy, economical recipes in women’s magazines from the late 1940s reflected that situation. 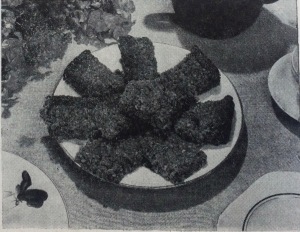 Previously, I had made a “nut pie” from a recipe in Stitchcraft‘s December 1949 issue, and having found cashews, walnuts and almonds in the cupboard, I made it again last week. It was delicious, came out perfectly and I can really recommend that recipe with whatever combination of nuts you have on hand. Today, I felt like baking something sweet and found these recipes for a date-and-ginger cake, cheese scones and “oat crunchies” on the cooking page of the September 1949 issue. I didn’t have dates but I did have oats, margarine and dark sugar beet syrup (black treacle / molasses), so oat crunchies it was.

The recipe is simple: 3 ounces lard and 3 ounces margarine, softened in the oven and mixed with 14 tablespoons oats, 3 tablespoons syrup and 1/2 teaspoon “bi-carbonate soda” (baking soda), then baked in a greased tin, cooled and cut into squares. What could be easier? I don’t cook with lard, but I did actually have two kinds of margarine, so that was the only substitution, and I made a half recipe to try it out. The consistency of the mixture before baking should have been “fairly stiff” but it was surprisingly liquid. I guessed the margarine had softened too much, i.e. melted, so I added more oats. Then I baked it at “Regulo 4, or 375”  (190 C) for 30 minutes as specified. 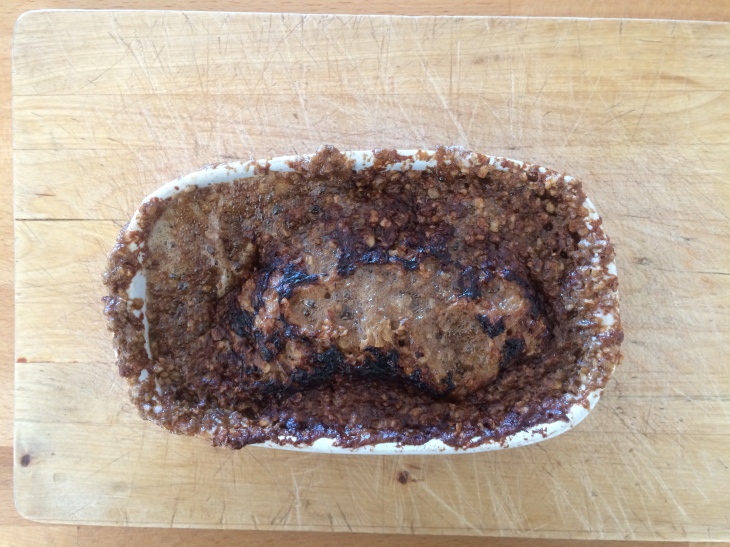 It bubbled up and sort of exploded in the oven while baking, burning a little on the top but still staying quite liquid throughout. It has cooled down by now and solidified slightly, but is still nowhere near “crunchy” territory — more like mushy granola. The recipe did say 3 ounces lard and 3 ounces margarine — maybe it should have been 3 ounces total? (I did remember to halve all the measures, so I definitely didn’t use twice as much fat as I should have.) It tastes absolutely delicious, though, as you might expect from something that is essentially fat mixed with sugar and a few oats!

Moral of the story: I probably won’t make this recipe again, definitely wouldn’t serve it to company (if anybody is allowed to visit ever again), but if anyone needs some fat- and sugar-packed lockdown comfort food that can be made without leaving the house for supplies, and doesn’t need to photograph said food for a blog or be seen eating it out of the baking pan with a spoon (ahem), this will probably fit the bill.

View all posts by thestitchcraftsixties